Home » Testosterone Information » Could Civilization Have Been Formed as a Result of Declining Testosterone Levels in Males?

Could Civilization Have Been Formed as a Result of Declining Testosterone Levels in Males?

Video Download: Civilization And The Changing Role Of Testosterone

Video Stream: Civilization And The Changing Role Of Testosterone 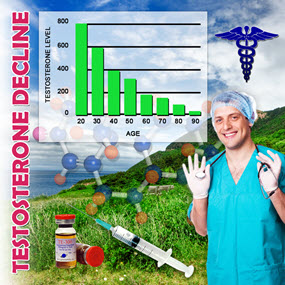 A recent study conducted by a Duke Anthropologist provides stunning insights into the way that human civilization formed countless ages ago.

In this study, nearly 1,500 modern and ancient skulls were measured and examined, and the conclusion is that modern males have much less Testosterone-related activity than their ancient counterparts, which likely played a role in mankind's ability to form the large social groups which were needed to preclude modern civilization.

The human skull structure of males changed dramatically since antiquity. Early men had strong, pronounced brows and more squarish heads, and as Testosterone Levels dropped, men began to form rounder, smoother skull, and facial features. Based on medical research, this change can be almost universally attributed to a decline in the average Testosterone Activity of man over time.

Robert Cieri was the lead researcher of this study, and his work was monitored by Steven Churchill, an Anthropologist that teaches and conducts research for Duke University.

Were Physiological Changes the Result of Less Testosterone, or a Body Less Responsive to Testosterone?

There are multiple hypotheses regarding how this decline in Testosterone activity took place during antiquity, however. It could be that men began to produce less Testosterone than their ancestors, but it could also be possible that they just became less sensitive to the influence of circulating Testosterone. Testosterone depends on receptor sites to produce effects, and if ancient men started to have fewer, the effects of Testosterone would be less pronounced in spite of similar Testosterone circulation.

Animal Research Important in Our Understanding of Testosterone and Aggression

Robert Cieri was not the only investigator in this study, he also had the assistance of Jingzhi Tan and Brian Hare, two researchers that specialize in animal psychology and cognition. Their expertise allowed Cieri to come to these competing hypotheses.

In particular, the researchers took into account a study of Siberian foxes. In this study, the foxes were bred to be more accepting of human interaction, and in the process, they experienced physiological changes that were not unlike those experienced by human beings as their Testosterone Levels declined. They became more docile and were less anxious around humans.

Dr. Hare also drew inferences from the differences among ape species, bonobos, and chimpanzees in particular. Chimpanzees produce a lot of Testosterone and they are very aggressive and seek dominance, whereas bonobos are special among ape species because they are non-monogamous and there is far less aggression amongst males, a sign of their lower Testosterone Levels.

In ape species, there is interspecies evidence regarding the impact of Testosterone, and in the Siberian fox study, there is evidence that aggression can be bred out of a species, and as that decline occurs, Testosterone activity declines.

Bonobos Respond to Stress with Cortisol, Chimpanzees with Testosterone

The two species also react differently to stressors in a similar manner. When chimpanzees get stressed out, their brains respond by releasing Testosterone, which increases their aggression toward their peers, whereas bonobos release a burst of cortisol, a stress hormone that encourages them to ameliorate the situation and back down rather than get into fights.

Because of the dramatically different ways that their bodies use Testosterone, their physical features differ dramatically as a result. Male chimpanzees have big, set, brows, whereas male bonobos have smooth, rounded foreheads almost universally.

Whereas the other two researchers were brought in for their specialty with animals, Cieri's purpose was to gather data from various skulls from different eras of human society.

What he found after measuring their features was that, over time, the upper face shortened, and the brow became less pronounced. Both of these are strong signs that Testosterone became less active as humans continued to develop and evolve.

Human Beings Rapidly Developed Signs of Culture Around 50,000 Years Ago

Human beings as they exist today have been around for over 200,000 years. Although humans remained physically very similar over this time, at some point about 50,000 B.C.E, humans began to develop a number of techniques associated with enhanced learning and social interaction.

They learned to control fire, they started to develop equipment capable of hunting birds and fish.

They started producing tools made of antler and bone and even began to utilize grindstone to produce flint and projectiles. Things began to change very quickly for human beings during this period in a way that had not been seen previously.

Finally, signs of culture as we know it today began to flourish during this period, as cave paintings and other forms of art began to appear across the human world.

Based on his study of human skulls, Cieri makes the argument that a decline in Testosterone activity helped facilitate these changes, because it increased the ability for human males to cooperate and live in communities, thus allowing information and learning to spread more effectively.

Cieri makes the salient point that for these tools to be created and passed down from generation to generation, human beings would have to be able to get along in a way that their ancestors were far less capable of doing.

Human beings likely thrived and propagated on earth because they developed the capability to better control their aggression and hostility, allowing for the earthly dominance of modern man.

The Role of Testosterone Today

Today, Testosterone still plays a major role in dominance and hierarchy, but it is much more subtle than it was in our distant past.

When we look at the symptoms of Testosterone Abuse, we can see how excess Testosterone can inhibit cooperation and community. Rather than exuding confidence and assertiveness like men with youthful levels of Testosterone, men become quicker to anger and more prone to acts of physical and social aggression.

By learning more about humans have subtly changed over time, we gather valuable insight regarding how our physiological chemistry impacts the way that we live our lives today.